The contents of the Necromunda: Underhive box are in English. However, the box also includes a fully translated 36-page regulation with all the information you need to play:

- Basic rules: the profiles of the gangers and weapons and the lina of view;
- Advanced rules: fight as a gang instead of as individuals, reload, finish ammo, throw grenades, use tactical cards, terrain and traps, appropriate loot and much more!
- An arsenal with every single weapon included in the box;
- Rules to create and name your gang, with a list of all available equipment and ganger options, including abilities;
- A scenario that tells you how to use the tiles of the game, deploy the gangs and establish the winner;
- A quick reference glossary that explains the terms used on tactical and combat cards.

Deep beneath the polluted nightmare city Necromunda, in the twisted and dark corridors of the Sub-fortheme, rival gangs fight to the death for personal power, survival and honor of the Houses.r />
Designed for 2 players, it is a game of tactics, skill and absolute ruthlessness, set on the famous anthill world Necromunda. Players choose one of the 2 gangs included in the box and fight brute skirmishesthem on the game plank using anything at their disposal: hiding behind barricades to survive volleys of bullets before jumping out to respond to the fire, setting up and circumventing traps, and using the decrepit corridors of the Sub-formines to unleash surgical attacks before fleeing back into the darkness. Survival in the Sub-fortheme is a difficult and desperate issue, and violence is often the only option.

Necromunda: Underhive is accompanied by a 104-page paperback that contains all the background and rules needed to immerse yourself in the industrial hell of Necromnda. It contains an introduction to the Imperium of Man, the role of the anthill worlds in the Imperium and a description of the typical structure of an anthill, as well as an in-depth explanation of the history of Necromunda, its main cities and the mysterious characters who inhabit them. Detailed accounts of the battles that take place daily in the Sub-fortheme and the loot they are fought for will inspire you for your matches./p>

The book also contains all the rules necessary to play, from basic line of sight, movement and combat mechanics, to advanced ones such as moving groups of models like a team, interfering in a melee, injuries, tactical cards and even to escape! The basic rules includeA scenario designed to facilitate the learning of the game to novices: the scenario uses a special tile printed on the inside of the box.

There's also a full Sub-forthem Arsenal, a list of weapons you'll find included with box thumbnails, and rules for using them in the game. You'll find shooting and melee weapons, gear and grenades. Finally, you'll find a guide to how to create a gang of the Escher House or the Goliath House, including a list of the types of gangers available and the weapons, equipment, and armor that each can use. There are even suggestions for how to call them: the citizens of the Sub-fortheme need an appropriate name..."br />
The book includes 6 scenarios, and each shows you how to arrange game tiles, how to deploy fighters, special rules, and scenario win conditions.

One of the main features of Necromunda: Underhive are the tactical cards included in the box. This adds a certain anarchy to the matches (after all, there are few rules in a real gang war) and represent the various tricks and tricks used by the Escher and Goliath Houses. They are divided into three categories: Gang Tactics, 20 cards that can be used by any House; Escher tactics, 4 cards that can only be used by the Escher House, and Goliath Tactics, 4 cards that can only be usedor the goliath House gangs.

In addition to these, there are also 42 Profile cards: 10 feature fighters named after the House Of Escher, with their own statesands and abilities listed for use as a quick reference in-game, and 10 others perform the same function for the House Goliath. Then there are 22 empty Profile cards, which you can use to create your own warriors and assemble your own necromunda: Underhive gang.br/>
Thumbnails

Warriors fighting in the name of the Goliath House are gigantic brutes, colossus of muscle, and repressed violence ready to explode. They are bigger and stronger than a normal man, flaunt their ability wherever they go and it's hard to ignore the air of brutality that the Goliaths wear like a cloak./>
Assemble your Goliath gang with the following components included:

- 10 bodies, 2 of each of 5 different types; everyone wears armor of furnace plates. They're designed specifically for certain weapon options, but of course you're free to assemble them however you like;
- 20 heads, 2 of each of 10 different types: four have respirators. There are 10 ridges, which can be used with whatever head you want;
- 10 armor, of 5different types, with shoulder pads and leg plates for each thumbnail;
Weapons! There are several: 2 brutal cleavers, 2 crane breakers, 4 machine guns, 2 shotguns, 2 'Renderizer' serrated axes, 2 automatic grenade launchers, 2 upgraded hammers, 2 combi-stubbers plasmas, 2 'Krumper' rivet cannons and 2 rifles machine guns, in addition to fragmentation and piercing grenades, 2 knives in the linings and 4 stocks of stimulant capsules.

The Casata Escher is unique among the great Houses of Necromunda since its gangs are composed entirely of women, lord of pharmaceutical manipulation and chemistry; what escher lacks in terms of physical strength is largely offset by speed, skill and psychotic appeal.

Assemble your Escher House gang with the following components included:

- 10 bodies, 2 of each of 5 different types; everyone wears bulletproof armor. They're designed specifically for certain weapon options, but of course you're free to assemble them however you like;
- 18 heads, 2 of each of 9 different types: four have respirators. There are 14 different hairs, 2 of each of 7 different types, which can be used with whatever head you want;
Weapons! There are several: 6 laser rifles, 8 laser pistols, 6 stiques, 2 shotguns, 4 upgraded swords, 2 automatic pistols, 2 stun whips, 2 needle/requ rifles2 plasma guns, 2 chemical hydrants and 2 automatic rifles, as well as fragmentation grenades, piercing suffocating and suffocating gas, 4 stitishes in the linings and 2 sets of chem synthesizers.

Also included are 25 round plastic sideburns (15 25mm and 10 32mm) that feature details that fit the tiles.

In addition to all this there are components that you can use to represent the sub-forthemy setting in your games:

- 9 different double-sided tiles, which can be combined into myriad configurations to cover the dark corridors and tunnels where gangs collide. The planks are very detailed and have walls, collapsed sections, missing floors and tuscan pools;
- A sprue containing 9 barricades, 5 crates (which can be assembled with or without the lid to allow a glimpse of the riches inside), 2 fragmentation traps, 1 thermal trap, 1 gas trap, 5 independent control terminals, 1 reliquary 1 lair of the beast (represented by a manhole from which sinister mutant tentacles emerge) and 1 priority marker;
- A sprue containing 7 heavy armored doors to be used in the game, with optional handles for 2 of them;
- One set of paper counters, which include 5 ducts, 3 thermal traps, 2 arc of fire silhouettes (1 for 25mm sideburns, the other for 32mm sideburns), 24 ready/nailed counters, 16 fire/ammunition counters, and 16 single/two-wound stab counters.

Finally, the dice and silhouettes needed to play:

2 other products in the same category: 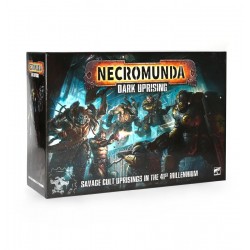